Where do I sell my work and how do I get there? Isn't that the question that is at the top of all of our lists? As John and I 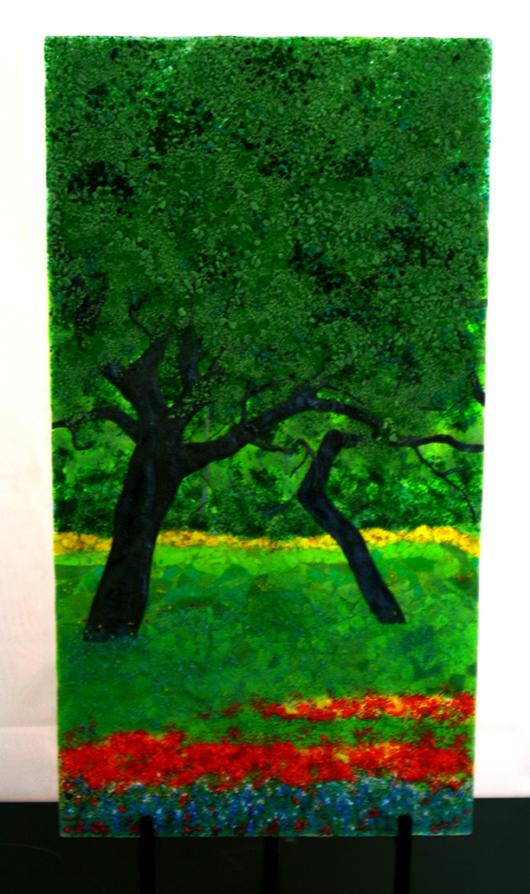 have plowed through what seemed at times to be an unknown and vast dessert with too few or too many direction signs, we eventually learned what worked for us. We've spent time investigating shows, galleries, commissions, advertising, contests and classes. All of these have been fruitful in one way or another, but some worked better for us than others. There are three that have impacted our business the most, and I will share those first.

Early in 2010, I was sent an email by Delphi concerning the Spring Art Glass Festival Contest. I remember saying to John, "Wouldn't it be great if they chose one of our pictures to put in their catalog? That would be great advertising for us, and it would be Free!" All I had to do was load up pictures on the site. Sounds easy, but when you are technologically handicapped, it is not so easy.

So I began to work through the process, and the first hurdle that had to be conquered was to take decent photographs. I found a digital camera on sale, John built me a closet-sized photo booth out of PVC, and we went to work. I will admit that although some of our photos were fairly good, we eventually hired a college student, Katie Smith, to help us out, and then eventually a professional photographer, Paul Rolle, was employed in the past year. But the photos submitted in 2010 were our own....good or bad. It is, of course, another whole field of study, and we had to decide if the time taken away from the glass was worth the cost. 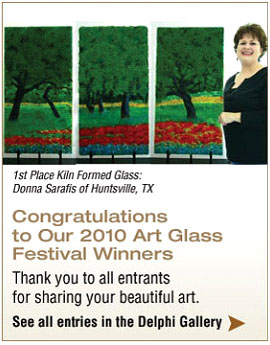 We waited with baited breath....hoping and praying that one of our pictures would catch their eye, but truthfully, I wouldn't let myself get too excited. There were just so many entries, and they were wonderful! Finally, we received an email directing us to click on a link which I did. Honestly, it was like slow motion. As I remember it, the page took forever to appear, and unbelievably, it said we had won First Place! I was stunned....overwhelmed may be more like it. I cried.

But this was only part of the good news. When Delphi sent out the email announcing the winners, they chose our picture to use on that email! We could never have paid for advertising like that, and, again, we were overwhelmed! This one effort has produced more than anything else we have done. We've received students from all over the United States. People who had never heard of Dancing Light Fused Glass Studio now know who we are. Delphi asked us to be the featured artist at the Festival this year...what a privilege! It was SO worth the effort! 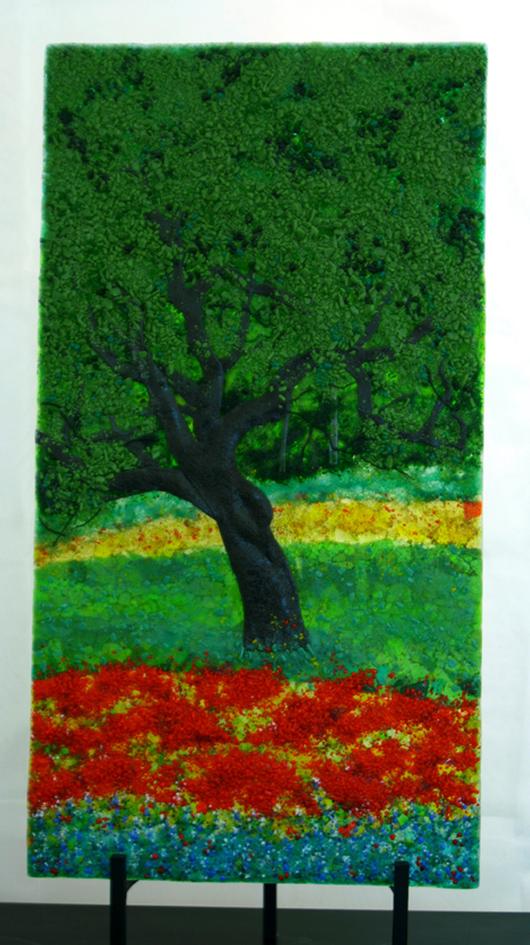 This year I encouraged our neighbor, Melanie Prause, to enter her first piece of fused glass in the contest. She was so hesitant, but eventually relented. When we were in Lansing in April, it was wonderful to hear from Roy and Val that her piece had come to their attention, and they loved it. Step out on the water....over and over again if necessary. You don't know who may be watching! 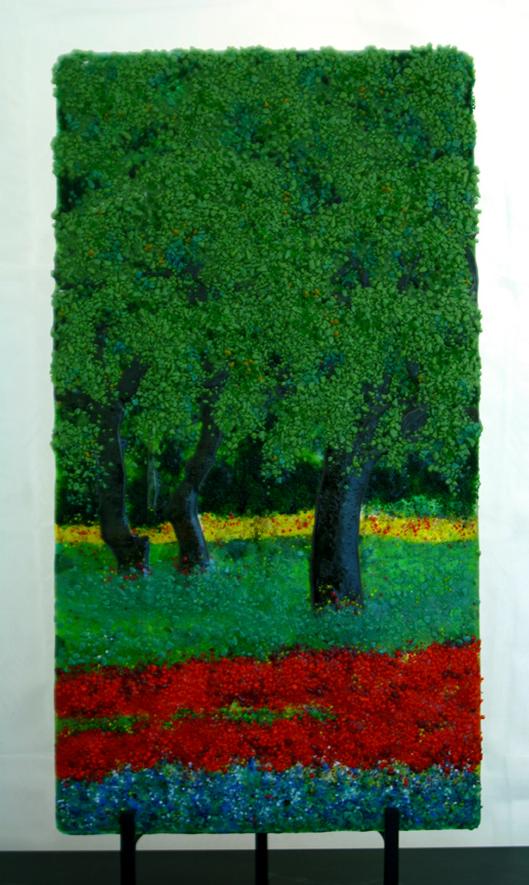 Want to participate in next year's Art Glass Festival? We announce all contests and special events through our Newsletters. Sign up today!

The views, opinions, positions or strategies expressed by the author and those providing comments are theirs alone, and do not necessarily reflect the views, opinions, positions or strategies of Delphi Glass. Delphi Glass makes no representations as to accuracy, completeness, currentness, suitability, or validity of any information in this article and will not be liable for any errors, omissions, or delays in this information or any losses, injuries, or damages arising from its display or use. Delphi Glass reserves the right to delete, edit, or alter in any manner it sees fit blog entries or comments that it, in its sole discretion, deems to be unacceptable.

Donna Sarafis and her husband John own Dancing Light Fused Glass Studio in Huntsville, TX. There they create their original designs which often include landscapes, birds, and florals with dimension and texture. Their studio also provides a wooded and peaceful atmosphere for their workshops where they teach their original, watercolor-like approach to painting with frit. Recently, Donna and John were the guest artists and instructors for the Delphi Art Glass Festival in Lansing, MI. In 2010, they were honored with a first place in the spring Art Glass Festival contest, and second place in the kiln formed category.

Donna Sarafis: The Work of Inspiration

Donna Sarafis: Inspiration from Within