In the winter of 2005, Craig Mitchell Smith wandered into a class at Delphi Glass in Lansing, MI. Six years, and thousands of creations later, Craig has taken the world by storm with his artistic vision. He is not a newcomer to the art world (his background is in painting, interior design, landscape and floral design), but glass changed everything for him. And what started as a hobby has quickly become a full-time job. His sculptures, some enormous in scale, have been spotted on television, in museum shows, garden exhibitions and now in his very own public gallery. In 2010, his glass cardinal 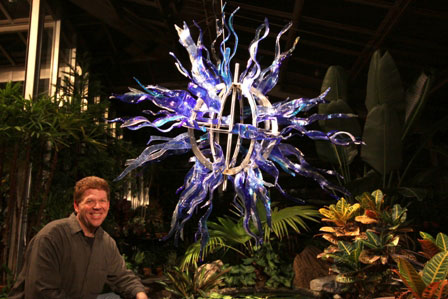 ornaments hung on the National Christmas Tree in Washingon, D.C.

When Dan Daniels, CEO of Delphi Glass, saw Craig's work for the first time he was speechless. He recognized in Craig a talent unmatched in the industry - the next great glass artist. Since then, Craig has become the darling of Delphi Glass, and is scheduled to appear in an upcoming catalog. Delphi Executive Director, Lisa Parks, caught up with Craig to ask him a few questions on his recent gallery opening and newfound fame.

DG: You recently opened a new gallery in Okemos, MI. Tell us a little about the Gallery and what you hope to achieve there.

CMS: I knew I needed to expand and was approached by the mall; they were offering this beautiful space (a former Ann Taylor store). The main purpose of this space is to make me accessible to people and get them exposure to my artwork. My future plans include being more private.

DG: What are some challenges you encountered in opening your Gallery? 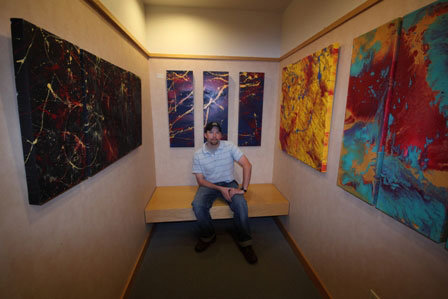 CMS: Lack of time! I signed the lease on September 8th and we opened October 15th. I was represented by five different galleries and pulled completely out of those locations in order to stock this place and represent myself.

DG: Tell us a little about the other artists exhibiting in your Gallery.

CMS: They are a talented, diverse group. The space of course, had dressing rooms that I figured we would never have a use for, but they are now converted to mini galleries. I know how hard it is for artists to get representation and also how much galleries charge. I dont take a cut of their sales, but each of them works four hours a week here in the gallery, which in turn helps me with staffing.

DG: When people come into your Gallery and view your work for the first time, how do they react?

CMS: They are often overwhelmed. The next comment is usually 'What do you mean ONE person made all this stuff?' Frequently followed by Why arent you in New York or Chicago? Why are you here in Okemos, Michigan?

DG: Some people are calling you the next Chihuly. How do you respond to that?

CMS: Squeamishly. I respect the work Chihuly has done over the last 25-plus years, but I am more influenced by Joseph Cornell and Andy Goldsworthy. Cornell is a mixed media artist that works more in allegory. He is trying to evoke feeling with objects. 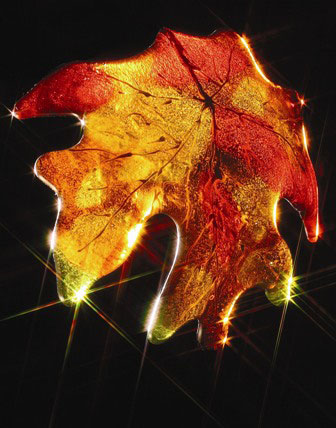 DG: Which parallels what you are doing?

CMS: Yes, it very much parallels what we are doing. My favorite pieces are allegorical.

DG: What have you learned about yourself since you started working in glass? At this point the gallery manager asks if she may interject...He has learned that he is more adaptable than he ever knew.

CMS: Craig acknowledges that and says, She has known me for years.Then Craig answers As I said in my artists statement, glass is what I want to be as a human being. Its colorful and transparent. Its malleable when warm and stronger than it looks. Its brittle when cold and if treated with care and respect endures the ages.

DG: You designed ornaments for the National Christmas tree in 2010. What was your inspiration for the ornament designs, and do you have plans for more ornaments in 2011?

CMS: The brief from the U.S. Parks De 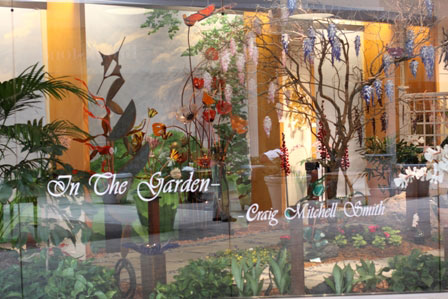 partment said the ornament should represent the store or territory from which it comes. I thought about winter in Michigan and kept coming back to the stark whiteness of the landscape but always with a shock of red- cardinals. So I designed an ornament featuring a bright red cardinal in an icy white nest. I will definitely be doing another ornament for 2011 and 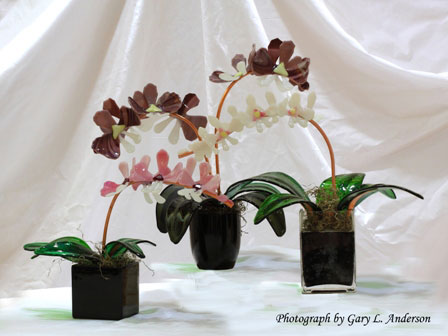 have plans to do one annually moving forward.

DG: Youve already had such great success as a glass artist, what do you hope to achieve in the future?

CMS:More galleries. I want to travel everywhere doing glass installations. I dont just want to sell finished pieces. The fun part is installing it and seeing it in a new environment.

We originally introduced you to Craig Mitchell Smith in an interview in November 2010. Read that interview now. To learn more about Craig, his work, and upcoming events, visit his website. Photos in this post were provided and used with permission, by photographer Gary Anderson.

Anthony C.  •  November 04, 2011
Every now and again...though rarely...there comes a phenomenally gifted aftist such as Craig Mitchell Smith. It just brings such joy to see such creativity while I, myself, always strive to 'think out of the box', as well. Unfortunately, I'm not nearly as gifted but I certainly can appreciate the brilliance of others. Thank you for sharing the vision of your art. You are certainly a rare gift! A. Criscuolo

Be Creative During Delphi’s Summer of Exciting Learning Opportunities!