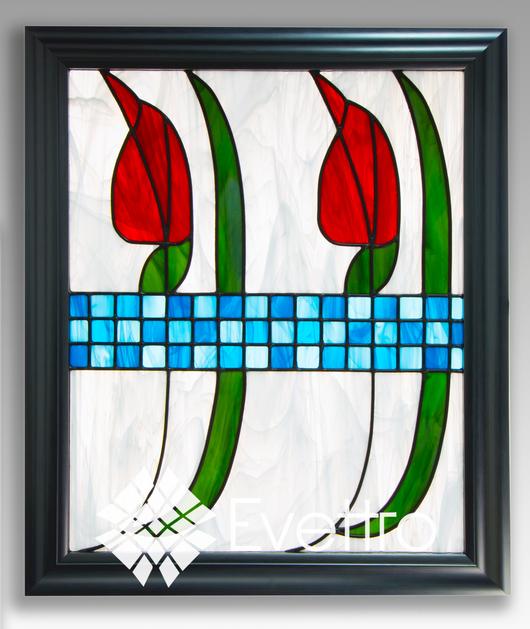 Handmade art nouveau stained glass panel with 70+ pieces. The opalescent wispy glasses provide a complete sense of privacy; but when the light transmits through the warmth of its cloud trails, the greatness of the artwork is released. The lead came was chemically treated to achieve a vintage touch. The silver genuine wood frame gives to “Rennie’s Red Tulips” a sense of romantic sophistication.

The piece has American glass. Its whole assembly and framing were done at Evettro’s Southern California studio.

The Art Nouveau ornamental style flourished between 1890 and 1910 throughout Europe and the United States. It is characterized by its use of long, sinuous and organic lines, inspired by the form of flower stalks, vine tendrils, insect wings, and other delicate and natural objects.

Tulips originate from Persia and Turkey. In Turkey, tulip flowers were used as an adornment on turbans. The Language of Flowers was invented during the Victorian Era, when it became fashionable to exchange messages by giving flowers. Each flower has its own meaning, with different flower colors often representing new shades of meaning. Through flowers, it's possible to express love, desire, sorrow, friendship and many other emotions.

“Rennie’s Red Tulips” is a vibrant and passionate tribute to one of the greatest architects and designers of the 20th century.

Are you sure you want to report this comment?