Of all the art mediums, glass is perhaps the most beautiful way to capture the magic of Mardi Gras. Glass artists in New Orleans, and across the US and worldwide, are embracing the holiday and creating some incredible projects. The Mardi Gras celebration is full of color and symbolism, and provides inspiration for bold, eccentric art. Delphi Artist, Julie Haan, whose talent extends into fusing, stained glass, mosaics and beyond, created the awesome projects you see in this post. Her inspiration? The rich history behind one of the world's most beloved celebrations.

The actual phrase Mardi Gras means Fat Tuesday in French. Its a long lasting European custom for people to overindulge before the sobering beginning of Lent. Some scholars believe the original roots can be traced back to ancient Roman times during their springtime feasting. In the United States, the Grand Capital of Mardi Gras is New Orleans, where celebrations have been going strong since the early 1700s. Mardi Gras is February 8, 2011.

In the United States, the Mardi Gras tradition was established by krewes or private clubs. Today more than 60 krewes plan the parades, the balls and outrageous costume parties. In 1872, the Russian Grand Duke, Alex Romanoff visited New Orleans. The citizens wanted to impress the Grand Duke and declared him King of the Day. This naming of Kings and Queens during Mardi Gras has become a very popular custom. When Grand Duke Romanoff was given the title King of the Day he wanted his Royal House colors to be used on his carriage ride through the streets. His three colors were purple (justice), green (faith), and gold (power). These three colors are now the official colors of Mardi Gras. The Fleur D Lis 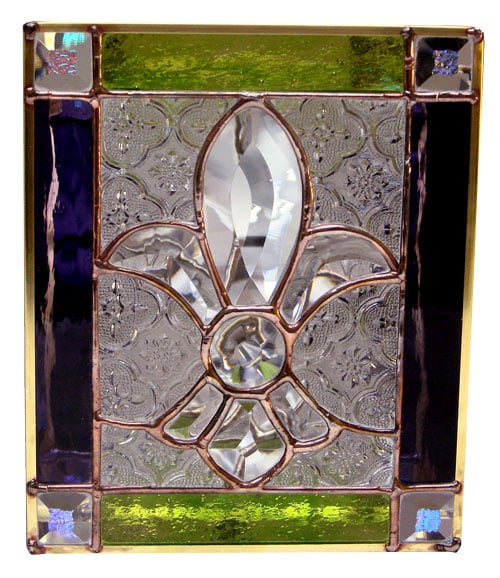 shape represents French Royalty. The Fleur D' Lis panel (right) was made using a bevel cluster in the center and square dichroic bevels in each of the four corners.. The Fleur D'Lis lapel pin (bottom right) has green, purple and clear cubic zirconias mounted in it and gold accents.

King Cake: In the Christian faith, the three wise men (or three Kings) arrived bearing gifts on the Twelfth Night or January 6 (Epiphany). After arriving, the Kings celebrated the birth of Jesus. The season of Mardi Gras always begins on this day. A new traditional has evolved. The King Cake was baked usually with a porcelain baby figure and who ever got the piece of cake with the baby, was assured of a prosperous and healthy upcoming year. As time progressed, these cakes became more elaborate, sometimes even with 22K gold babies inserted after baking. Today the cakes are decorated and frosted using the three main colors, of purple, green and gold. The handpainted fused bowl (lower right) is used to hold a King Cake. It is 18 in diameter with sparkling gold accents.

Costumes and Masks: The tradition of dressing in costumes and wearing masks has been part of Fat Tuesday since the first Krewe party. The idea was to hide one's true identity. Many masks were created with feathers to mimic birds or sub-terrain 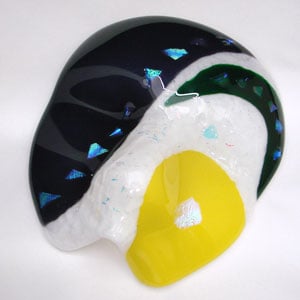 animals. The masks became darker and more sinister as well as the costumes. Today anything goes as far as costumes, however, masks are highly sought-after souvenirs. Many artists will create a new mask for each Mardi Gras celebration. Lavish balls are still hosted to showcase costumes and masks. Many international apparel designers have created celebrity costumes for these highly sought after invitation-only parties. The mask (top left) was cast and fused with embedded gold leaf. The mask (at right) was draped over a mold and fused with sparkling dichoric chips.

Bead Throwing: The tradition of throwing beads has been long associated with the Mardi Gras parades. Originally coins or doubloons were thrown or given away to the parade watchers as a token of wealth and prosperity. As the crowds grew, the expense became prohibited. Colorful glass beads were substituted for many years and vast collections were acquired and highly prized. Many collector beads have been passed down from generation to generation. In the late '50s and '60s plastic cups were given away with the various Krewes names and logos. With the explosion of inexpensive imports, the bright plastic beads strung together as necklaces have become the standard norm for parade giveaways. Starting around 1905, coconuts were thrown and given away along the parade route. These were highly prized and coveted. In addition for a short time, gold leafed walnuts with gold glitter were also 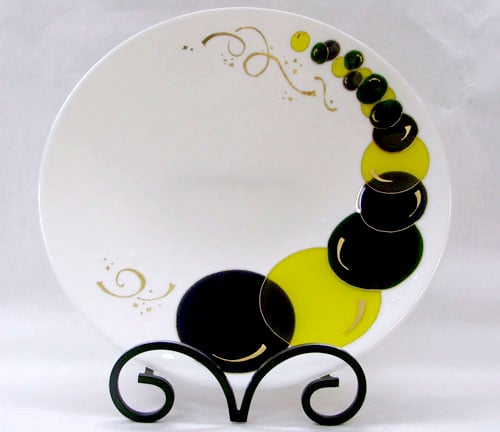 distributed. The coconuts have been discontinued on most floats due to liability. In 2002 a limited collector series of coconuts are produced and given away to visiting royalties, city notables and other global dignitaries.

At exactly 12:01 a.m. on Wednesday, Mardi Gras is over. The time of thoughtful meditation and Lent begins. Police begin opening streets again for traffic and slowly the partiers begin to go home. Local retailers call this time Trash Wednesday instead of Ash Wednesday. It has been said, the more trash after Mardi Gras the better the upcoming year for all retailers, restaurants and the entire city of New Orleans. 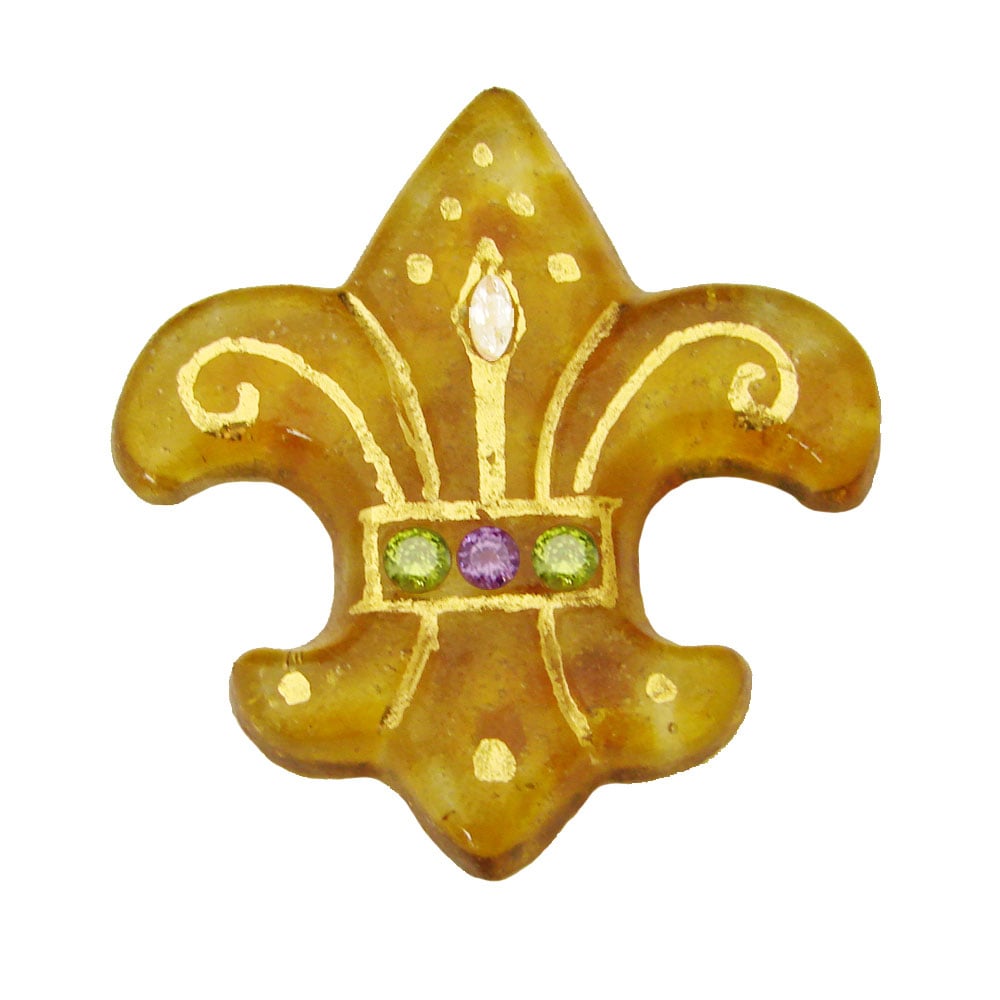 Capture the Season in Glass

Dare to Dream: Be Inspired with Dreamcatchers

Meet John Kershek –Trend Forecaster John has spent many years of his career in the fashion and trend industries. He has created numerous products that have combined the most up-to-date looks with functionality. John has been a global traveler and has searched many countries and cities for the next new color or emerging new lifestyle trend. In one article, John was noted for his “sensible taste, his acute color awareness and practical approach to fashion.” Throughout his career, John has championed new products that have become instant best sellers. “I always want to show how an average person can change up his or her environment by adding dashes of color, a new pattern or a quick twist of everyday objects. I believe global fashions or trends are instant to all people, regardless of where they live. Each of us can see new colors or trends in many different ways. I enjoy showcasing fresh ideas or concepts and watch as YOU make them relative to your own space,” said John. John will be explaining how colors and trends ebb and flow in our daily lives. He will teach us how a “creative eye” can jump start a new fresh approach in our personal spaces. Look for various articles in the future from the “TREND FORECASTER."

Great Gifts in Under 3 Hours